The Wright Brothers and the Invention of the Aerial Age

The Wright exhibit is constructed in a chronological horseshoe surrounding a model of the glider. The decor is reminiscent of a classic midwestern house, in terms of lamps and wall paneling. There are many informative signs and several airplane models, including the central one. There are also several smaller interactive models that demonstrate engineering principles in the gliders.

The first display contains information about the Wright family as a whole. The family built a life in Dayton, Ohio, where Wilbur and Orville’s parents were significantly involved in social reform movements. Their parents had seven children total, two of whom died in infancy.

Next, Orville and Wilbur’s character is examined. Wilbur tended to be calm and confident, while Orville had an impulsive and optimistic nature. Neither brother attended college, and Orville did not finish high school. However, both brothers were intellectually curious and continued to study and apply themselves out of school.

They brought their intelligence and aptitude to their later endeavors. The Wrights’ founded a printing company, Wright & Wright Printers. In addition to printing newspapers, they also built several of the presses. Later they founded the Wright Cycling Company, which was successful and provided them with a stable income. 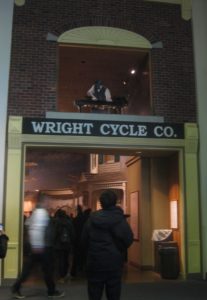 The next phase of the exhibit details the research and prototypes the Wright brothers used in making their airplanes. Mechanically, bicycles do have similarity to airplanes, so their day jobs provided a groundwork for the research.

After much research and experimentation, the brothers progressed to full size, man-carrying gliders. They did not have enough space to test the gliders in their home state of Ohio, so they transported several iterations of the glider to Kitty Hawk, North Carolina over a number of years. The 1902 version was the first fully controllable glider, and the 1903 version incorporated propellers.

The final sections of the exhibit focus on the impact of the Wright glider, the development of aeronautics, and how the airplane featured in the public consciousness. The Wright brothers developed the process of flight testing, gathering data on flights and then modify the models in turn, which is still used in aeronautics today.

Contemplate scientific advancements from our cozy DC bed and breakfast. Our inn near Dupont Circle is an easy metro ride from the Air and Space Museum on the National Mall.