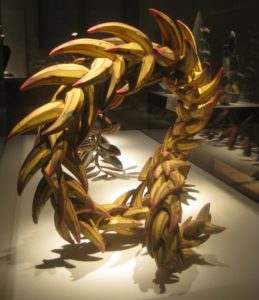 Michael Sherrill is a North Carolina based craftsman. He works with a variety of materials to create both household objects and sculptures. He began his career as a potter, creating bowls and other common items. Over time, Michael Sherrill’s creations became more whimsical. His work now incorporates clay, metal, and glass in sculptures that imitate plants and the natural world. Sherrill draws inspiration from the North Carolina mountains surrounding his studio, where he has worked since 1974.

Retrospective at the Renwick Gallery examins the length of Michael Sherrill’s career. As such, the exhibit is divided into four parts: Early Works, Teapots, Studio, and Contemporary Sculpture. The Early Works section displays various pots that Sherrill created. The pots draw from many traditions all over the world. The Teapots section focuses on, well, teapots. As a homeware item, teapots were a natural part of Sherrill’s earlier work. However, throughout this section, you can see Sherrill’s focus shift from utility to aesthetics and sculpture. Many of the teapots are not functional but rather deeply striking to look at.

The Studio section is fairly small and straightforward. There are some pictures of Sherrill’s workspace, as well as a video of Sherrill describing what studio life is like and how it has influenced him. Never easily satisfied, Sherrill modified many tools for his art in this studio, which eventually led him to found his own tool company, Mudtools. The final section, Contemporary Sculpture, features Sherrill’s most distinctive and striking works. The vast majority of these sculptures are modeled on plants. The artist uses intricate combinations of materials to imitate the natural world. As an artist, Sherrill says he works on ‘seeing things fresh’ and inviting others to do the same. The sculptures invite the viewer to do just that with their beautiful attention to color and detail.

The Renwick Gallery is a brisk 20-minute walk from our DC bed and breakfast, American Guest House. On your next DC trip, enjoy a comfortable stay at our quaint DC inn with easy access to downtown.