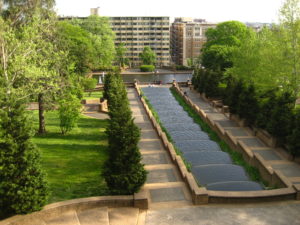 Big, fluffy clouds drifted by overhead as I made my way from our DC B&B near DuPont Circle to Meridian Park. Because I’m rather new to the area, I have spent the past few days researching things to do in DC. When I saw that Meridian Park was only a 15 minute walk away, I put it on my list of places to check out.

My first thought as I approached the park was, “Holy crap, this is a BIG park.” There are massive, concrete walls around the 12 acres of urban green space, making the park itself feel like fortress. Essentially split into two parts, the Southern-most end of Meridian features most notably a statue of the great, Italian poet Dante and a massive, cascading fountain. Today, and I’m assuming until spring, the fountain was void of water, but the effect of the monumental steps was still great. 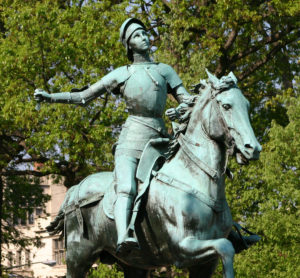 Once I reached the very top, I was greeted by armor-clad Joan of Arc riding horseback and looking skyward. This statue of Joan of Arc on her horse, I later found out, is the only equestrian statue in Washington D.C. that honors a woman. The park stretches out into a flat, grassy space. You would think that compared to the magnificent fountain this part of the park would be less notable, but let me tell you, it’s anything but boring.

Before I saw much of anything, I heard the drums. Dozens of D.C. residents of all ages, genders, and ethic diversity were gathered together in a circle, their palms rhythmically beating on their drums. While some danced around to the beat, most of the other park patrons merely enjoyed the music as background–they were much too busy in their activities.

Multiple hammocks swayed from trees and many a picnic blanket was spread over the grass. People ate out of coolers and baskets, other walked around sporting red solo cups filled with unknown liquids. Kids rolled by on scooters and bikes, and groups of people walked by leisurely with coffee or a dog on a leash or bags of groceries. I saw solo readers sitting on benches and runners making use of the somewhat track-like circle around the grass.

On the more eccentric side, I watched jugglers, baton twirlers, and hula hoopers practice and perform while people gave them little or no mind. There were barefooted nappers, slack-line walkers, and hacky-sackers (I don’t think I’ve seen hacky sack that intense since middle school). There was so much to take in that I was entertained for a little over an hour just sitting in the shade and looking out into the park.

It’s refreshing to know that urban green space is put to good use. It’s a place for music, food, sports, and art. It’s a place for community. I will definitely be back to Meridian Hill Park next Sunday to see experience the residents and culture of Northwestern D.C. and I encourage any guests staying at our Washington Inn to do the same!

As I was getting reading to leave, I heard a little girl walking past asking her parents, “Why are there so many people here?” Her mom responded, “Because it’s a beautiful day and it’s a beautiful park.”  That it is.