Events and Festivals in Washington DC:

Every April, our nation’s capital changes into the most spectacular color of pink one can imagine as the Cherry Trees lining the National Mall and Potomac Rivers burst forth with life and vitality. This phenomenon is an annual treat for locals as well as the hundreds of thousands of visitors who travel far and wide to witness the blooming of the Cherry Trees at the National Cherry Blossom Festival each year.

The history of the Cherry Blossoms in our nation’s capital owes its gratitude to Eliza Ruhamah Scidmore. Mrs. Scidmore was the first female member of the National Geographic Society. Upon returning from a visit to Japan in 1885 and being highly impressed with the Cherry Trees there, she approached the Office of Public Buildings and Grounds to inquire about the possibility of Cherry Blossoms being planted along the Potomac River. Her request was denied. However, Mrs. Scidmore did not quit. Over the course of the following 24 years, she sought out local public leaders to be on board with the vision of Cherry Trees in Washington D.C. After no avail, she finally took it upon herself to raise the necessary funds to purchase the required amount of Cherry Blossoms to brighten up the National Mall. Penning a letter to First Lady Hellen Herron Taft in 1909, her plan quickly gained traction and the needed support. Shortly thereafter, a Japanese chemist by the name of Dr. Jokichi Takamine approached First Lady Taft to see if the United States would be interested in accepting a donation of 2,000 Cherry Trees. The First Lady accepted, and the first batch of Cherry Trees arrived in 1912. This would be the first of multiple gifts by Japan to the United States (again in 1912, 1965, 1996, and 2002). 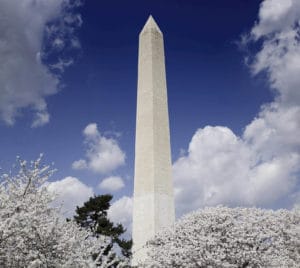 Origins of the Festival

The first National Cherry Blossom Festival was held in 1934. Sponsored by several different civic groups, it was meant as a way to commemorate the Japanese – American friendship and the first batch of Cherry Trees gifted by Japan in 1912. In the aftermath of the Pearl Harbor attacks in 1941, four trees were vandalized which resulted in the festival being suspended during WWII. Resuming in 1947, the festival has occurred each year since.

When to Witness the Cherry Blossoms

The time frame for the trees to bloom can vary slightly each year. However, the end of March and into the early part of April is when the trees are usually at peak bloom. For a better idea of when to plan your visit to see the trees in full bloom, you can visit the Cherry Blossom Forecast here. As far as the festival goes, those dates have already been scheduled and as you can see below, there is something for everyone!

A few events taking place during the Cherry Blossom Festival: 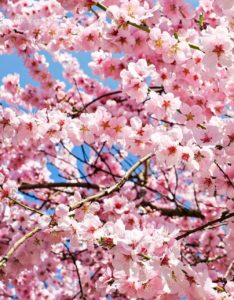 The annual Cherry Blossom Festival brings in hundreds of thousands of visitors each year. With that said, finding a place to stay during this time can be a little tricky. Conveniently located to both Dupont Circle and Woodly Park metro stops (red line), our Washington DC hotel is a nice break away from the big hotel routine. On your next Cherry Blossom visit to our nation’s capital, we hope you will choose to spend part of your time with us.