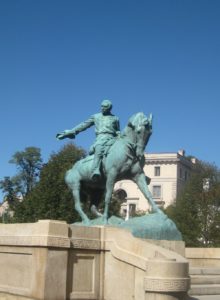 As I walk around the city, I am on the lookout for pleasant places to stop and rest. The statue of General Sheridan in the Sheridan traffic circle is one such place. Located on Massachusettes Avenue along Embassy Row, the circle is conveniently located while remaining quiet and peaceful. The traffic circle is the size of a small park, complete with plenty of benches. At the center of the circle is an equestrian statue. General Sheridan sits atop a robust and heroic-looking horse in his military garb. The statue is positioned on a large granite base.

Philip Sheridan was a Union General during the Civil War. He distinguished himself at the Battle of Chattanooga. This was one factor in Grant eventually placing him in charge of the Cavalry Corps of the Army of the Potomac. However, he is probably best remembered for his scorched earth policy in the Shenandoah Valley. The Union Army burned farms and land in the area to prevent Confederate forces from using the resources. While this was an effective military strategy, it left a great deal of destruction in its wake.

Sheridan played an integral role in the Union Army and continued his military career after the Civil War ended. In his retirement, he became an avid advocate for the protection of what is now Yellowstone National Park. 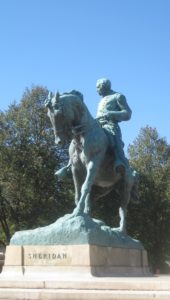 Congress passed an act authorizing the statue in 1889. After some delays, the statue was erected and dedicated in 1908. Gutzon Borglum sculpted the statue itself. He paid special attention to the heroic stance of both the horse and its rider. Architect Henry Winslow designed the surrounding base.

Book your stay at our cozy DC bed and breakfast. Before setting out to explore Embassy row, we will serve you a filling breakfast. After a long day of DC sightseeing, you can look forward to a good sleep on a comfortable bed.