There are so many museums and galleries in Washington DC that picking attractions to visit can feel like picking a name out of a hat. While it’s true that there’s a plethora of great things to see in DC, there is one exhibit in particular I recommend putting on your list: The Electronic Superhighway exhibit at the American Art Museum.

The American Art Museum is a Smithsonian museum 15 minutes from our DC Hotel that was established in 1829. It has one of the world’s richest collections of art, from early to modern art. The Electronic Superhighway is an exhibit on the third floor of the museum in the east wing–you can’t miss it. It is about 15 x 40 x 4 feet and a fantastic sensory overload. 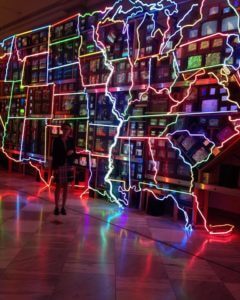 The exhibit is a map of the United States. However, instead of paper, it uses TV screens, and instead of borderlines, it uses neon light tubing. The screens of the TVs flash through pictures and video and sound, each chosen specifically to represent the state it is contained in. When you first see the map, the only thing you can do it stare at it in awe. It almost feels like hypnosis, and your brain is working as hard as the generators (this exhibit has its own personal generator) to make sense of the quick, flashing images and competing sounds.

The mastermind behind this great piece of art is Korean-born artist Nam June Paik. He was born in Seoul, South Korea in 1932 and was trained as a classical pianist. After graduating from University of Tokyo, he moved to West Germany. In 1964, Paik moved to New York. In 1995, he created Electronic Superhighway. He passed away in 2006, but his legacy of the founder of “video art” lives on in the Smithsonian exhibit.