Searching for a great attraction to add to your Washington D.C. itinerary? Look no further than the Washington National Cathedral. Officially completed in 1990, this iconic structure took 83 years to build. While domineering in size and scope, the National Cathedral adds a calming presence to the skyline of Washington. Located in the northwest quadrant of D.C., it can be seen from many parts of the capital.

The designer of Washington D.C. – Pierre L’Enfant – specified in his 1792 “Plan of Federal City” that there be a cathedral for national events and purposes. However, there was not a requirement for which denomination or sect of Christianity the cathedral should be a part of. This missing criteria for a national church would be a key detail in the delay of its building. As a result, this feature of L’Enfant’s Plan was not realized until much later on in Washington D.C.’s history. It was not until President Theodore Roosevelt, that Construction began in September 1907. He delivered a ceremonial speech and placed the first cornerstone of the cathedral. 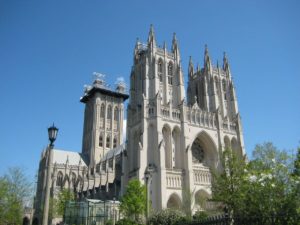 This place of worship has been a major landmark for many national moments over many decades in the 20th century and 21st century. It has been the backdrop for prayer services for the following presidents following their inauguration day activities:

The Washington National Cathedral has also been the site for countless memorial services for U.S. Presidents and other world leaders. The list includes the following: 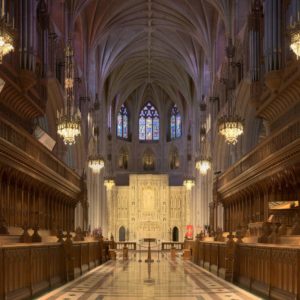 For those wishing to break away from downtown D.C., you can visit the Washington National Cathedral any day of the week. Visitors hoping to find a worship service can attend on Sunday mornings free of charge. There are also evening concerts every Monday through Thursday at 5:30 PM that can be attended by all. Outside of service hours, admission to the cathedral is required: $12 for adults,  $8 for children ages 5 to 17 and free for kids 4 and under. Special daily walking highlights tours take place at 10:15 a.m. Monday through Saturday, and 1 p.m. on Sunday, For more information on these tours as well as which items are permitted and not permitted please click here.

**Please note that the current COVID-19 situation has drastically affected all Washington National Cathedral services and events. Please do comprehensive research if you plan on visiting in the coming weeks**

If you’re in town for a few days, we would love to host you at our Washington D.C. inn. Situated close to Dupont Circle and Massachusettes Avenue, we are a 10 minute drive from Washington National Cathedral. Those wishing to walk can expect a 25 minutes journey as they explore the different neighborhoods along the way. Nearby our b&b are many attractions and things to keep you busy. Looking for food from Afghanistan or some of the best jumbo slices of pizza in your life? Our Adams Morgan neighborhood has you covered with restaurants offering food from all corners of the globe. We hope to see you soon at the American Guest House – your home away from home.