The iconic Lincoln Memorial is a must-see for any tourist visiting Washington DC!

The Lincoln Memorial is a 99-foot tall marble structure in the style of classic Greek architecture. It is built out of Yule Marble quarried from Colorado. It sits atop 145 steps leading up from the reflection pool at the National Mall. The memorial houses a 19-foot tall marble statue of Abraham Lincoln. If the statue were to be standing Lincoln would stand 28-feet tall from head to toe. It was completed in 1922, 8 years after construction began in 1914.

The memorial also features inscriptions from two of Lincoln’s most famous speeches, The Gettysburg Address and his second inaugural address. It has also been the site of many other famous speeches since it’s construction. This was the site of Martin Luther King Jr.’s “I Have A Dream” speech. 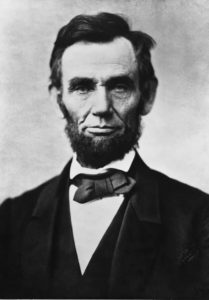 Abraham Lincoln was the 16th President of the United States of America. He is considered one of the most important presidents in United States history. He led the northern states to victory during the Civil War as commander in chief. This resulted in America’s reunification as a single united nation. It also allowed freedom for the 3.5 million African American slaves living in the United States at that time. He served in office from March 4, 1861, until his assassination on April 15, 1865.

Visit the White House’s official biography of Lincoln in order to learn more about his presidency and life. 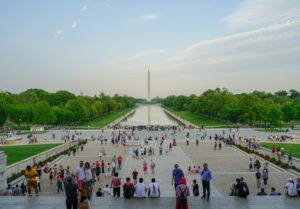 Visitors converge on the Lincoln Memorial

The Lincoln Memorial sits at the west end of the National Mall, which is a large grassy field that is home to the White House, Capitol Hill, and many other great national and historic monuments. Because of this, the National Mall is one of the top things to do in Washington D.C. and is the most highly-trafficked national park in America.

To see a map of the National Mall and learn about the sites there click here.

Join a park ranger at the Lincoln Memorial to explore the memorial and learn about the art and symbols inside.

The tours typically start at 2:00 PM.

Getting Around the National Mall

There are a lot of really great neighborhoods to eat at and explore within walking distance of the Lincoln Memorial, such as Downtown and Foggy Bottom. If you have half an hour the Georgetown Waterfront Park is a great addition to any afternoon adventure. Featuring a walking path as well as a bike lane you can take a picturesque walk by the Potomac River. Start at the Lincoln Memorial and head into Georgetown. Along this path, you will also pass the John F. Kennedy Center for the Performing Arts. The center has a free event at their Millenium Stage every night at 6 PM. To see a full schedule of current concerts and events click here.

Lodging While in Washington D.C.

We hope to have been able to help in planning your Washington D.C. itinerary. We hope to see you here with us at American Guest House, a bed and breakfast in Washington D.C. conveniently located a 12-minute drive from the Lincoln Memorial and a 10-minute walk to major food, culture, and local transport hub, Dupont Circle.